A collection of my favourite recipes & remedies from Mexico and around the world. 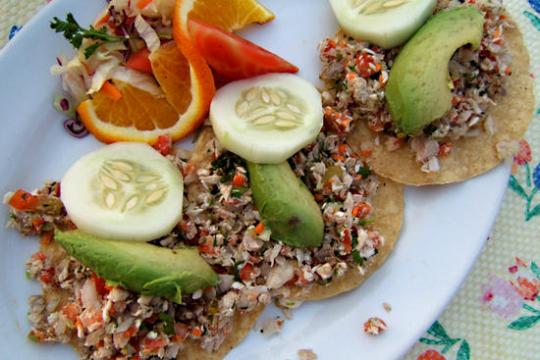 Ceviche or cebiche is basically seafood left in lime juice to marinade or “cook” before mixing in a few other key ingredients and serving with crunchy tostadas (fried or baked tortillas), salty crackers or totopos, otherwise known as tortilla chips to us non mexicans. It’s a healthy and wonderfully fresh dish to serve as “botana” the perfect companion to an ice cold beer or white wine.

I actually thought ceviche was of Mexican origin as I have never come across it in another place, but then I haven’t been further south than Guatemala on this continent so that may be why. It is common in coastal areas of Central and South America (and the Philippines), with the Peruvians claiming it as part of their national heritage and even have a special day for it! However the recipe varies from place to place, so much so that even different states in Mexico have different ways to prepare it. 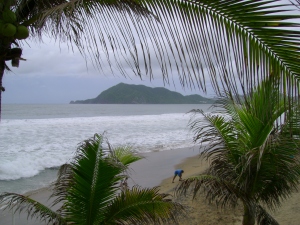 A cloudy day at the beach in Manzanillo

Living in Manzanillo one of the things that is plentiful here year round is fresh seafood, or mariscos as its called in Spanish. You can use whatever combination of white fish, prawns, calamari, clams or any other seafood you like or can get hold of, it just has to be fresh! I like to use Mahi Mahi aka Dorado or a fish called Chile that we have here in Manzanillo, I don’t know the name in English but it is very cheap, only $60 pesos a kilo in the market in Santiago, supposedly it is the best one for ceviche. The other great thing here is that you can buy the fish already minced so you don’t have to do anything except mix the ingredients! If you cannot buy the fish ready minced then just open the fish up  and scrape the flesh of the skin with a fork, taking care to discard any bones.

Thinking that the fish is raw may be off-putting for some but the acid in the lime juice actually denatures the proteins and partially cooks the fish. Obviously it needs to be kept refrigerated until ready to be eaten and any not eaten should be returned immediately to the fridge where it can be kept for the next day if stored in an airtight container, I personally wouldn’t recommend keeping it for longer than that and I have been told that it shouldn’t be frozen.

Note: I only wanted to make enough for my husband and I but as my husband was buying the fish, you know how men are, they always buy more than necessary so I had way more than the quarter of each i asked for. I made it all as i knew there was no point saving that little bit of extra fish and prawns. We decided that if there was any left over we would take it with us to the beach the next day as our botana.. only there was none left the next day! We ate it as lunch, then after a few cold kaguamas we finished the rest off for dinner that evening. I don’t know how healthy it is when consumed in that amount but it certainly was delicious! The spiciness goes great with the cold beer and the freshness of the lime and cilantro really makes this such an aromatic dish, it doesn’t smell that fishy at all that is a good way to know if its bad, it if it smells bad, don’t eat it – pretty obvious really!

So I have put the exact amounts that I used that day because it was really good and I never bothered to weigh anything before this!

This makes enough for 4-6 good size servings or just put it in a large bowl on the table with side plates and plenty of tostadas or Saladitas (salty crackers) for people to help themselves. Salsa Valentina or Tamazula goes well with this or this Spicy Red Salsa made from chile de arbol is also amazing with ceviche.. now to the recipe.

390g Minced Fish – dorado, chile, ajugon or any other white fish
330g Large-Medium sized Prawns*, peeled and veined, can be left whole or chopped
3 Medium Tomatoes, washed and finely chopped
1/2 Large Onion, finely chopped
2 Chilis’ Serranos, minced – use more or less according to your taste
Handful of Fresh Cilantro, washed and finely chopped
Juice of 3-6 Limes (depending how juicy and strong they are)
1 Avocado, halved, out of shell and cut in strips to garnish
Salt to taste

*The prawns I had, I’m not sure what species they were but they were on the large-medium size and reddish-pink ($150 pesos per kilo in Santiago market), weighed 320g with shell on, once I had peeled and veined them they weighed around 250g. If you can get them fresh with shell off I highly recommend it as they are fiddly and gross to clean.

1. Put fish and prawns or whatever seafood you are using in a large bowl, pour in the lime juice, mix thoroughly, cover and put into the fridge to marinade at least 30 minutes. Once the juice is mixed in you won’t smell the fish smell, saying that fresh fish should not smell too fishy anyway!

2. Chop all the other ingredients while the seafood is marinading and make the salsa if you are going to make one. 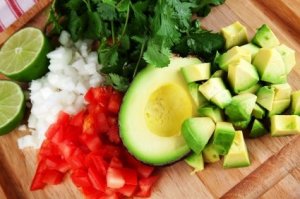 3. Once the seafood has “cooked” sufficiently in the lime juice, take it out of the fridge and add the rest of the ingredients. Mix thoroughly so that everything is evenly distributed. You can return it to the fridge until it is ready to be served or serve immediately with Spicy Red Salsa and tostadas or salty crackers and an ice-cold beer to wash it down.

If anyone has any their own recipe for ceviche or more raw fish recipes or suggestions, i’d love to hear them .. hasta pronto amigos, que tengan un buen fin de semana, saludos!

How to Make Tahini

How to Make Labneh (Yoghurt Cheese) at Home

Error: Twitter did not respond. Please wait a few minutes and refresh this page.